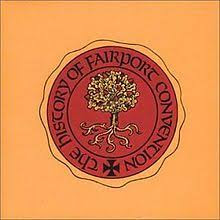 Fairport Convention, probably the world's most well known folk group have been on the go for what seems like forever.
Actually it is only from 1967 so they are not as old as me. Hard to believe but there you are.
The History of Fairport Convention anthology on the Island Masters label is from 1972 and covers the period when they were at their peak
A time when the line up included the likes of Richard Thomson, Ashley Hutchins and Sandy Denny among others
Indeed in 1969 alone they managed to produce three classic albums  in What We Did on Our Holidays, Unhalfbricking and Liege &Lief - the Ryan Adams or Jack White of their day in terms of their prolificity


A version of the band including veterans Simon Nicol and Dave Pegg is still on the go and curating their annual Cropreddy Festival.

A band worthy of a family tree 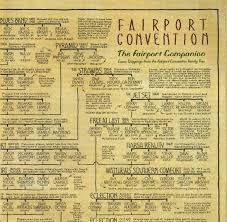 Fairport Convention - Meet on the Ledge