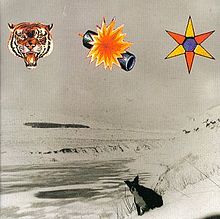 I've just checked and I have previously featured three songs by The Beta Band on these pages none of which were from The Three EPs
As the name suggests a compilation of their first three EPs and one which attained legendary status when referenced in the film High Fidelity.
Prior to this it already had a degree of cult status following it's release in 1988.
I bought the CD compilation after I had read Songs in the Key of Fife by Vic Galloway
As I said in the comments after a first listen my head was completely scrambled but in a good way.
I can't say that I play it very often but I'm glad it's on the shelves. It should be on yours.

One from each of the EP's for you.
Thanks to High Fidelity you will all be familiar with Dry the Rain from the first EP Champion Versions
From the second EP The Patty Patty Sound here is over 8 minutes of weirdness entitled She's The One
Finally from the third EP Los Amigos Del Beta Banditos I give you the the final track Needles in my Eyes.


The Beta Band - Dry The Rain

The Beta Band - She's The One

The Beta Band - Needles in My Eyes