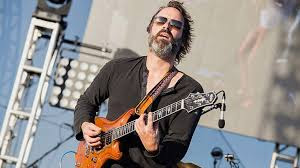 It was really sad to read that Americana singer and guitarist Neal Casal has taken his own life at the age of just 50.
I saw him play as a solo artist on a number of occasions and as a guitarist with Lucinda Williams.
He was also a member of Hazy Mallaze and then one of Ryan Adam's Cardinals. He subsequently played guitar with both Hard Working Americans and  the Chris Robinson Brotherhood.

For those interested in his solo work the anthology Leaving Traces: Songs 1994-2004 is a good place to start. On hearing the sad news the first album I reached for was 2000's Anytime Tomorrow on the Glitterhouse label and the song Willow Jane.
A fine singer and song writer and a great guitarist.