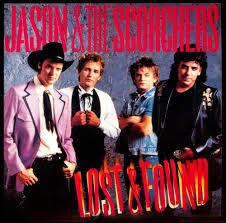 I picked up Lost & Found the 1995 debut album by cowpunks Jason & the Scorchers on EMI America a couple of months ago. I'm not quite sure why it has taken me so long to post it.
Critically acclaimed at the time but commercially unsuccessful (like many of the other albums on the shelves). One theory was that they were too country for the rock radio stations in the States and too rocky for country radio. There may be an element of truth in that given that on the album cover two of them are in country clobber and two looking a bit more rockier.

They have a reputation as a really good live band. Unfortunately I've never seen them but I have seen the main man Jason Ringenberg live on a couple of occasions. He is most definitely country.

I've gone for Shop it Around and a scorching version of the Leon Payne classic Lost Highway - did you see what I did there.?

Jason & the Scorchers - Shop It Around

Jason & the Scorchers - Lost Highway
Posted by Charity Chic at 08:00