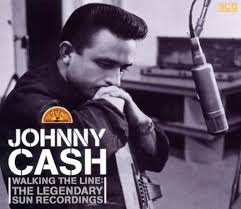 For me the best parts of Johnny Cash's career were the beginning and the end.
I'm sure that I have waxed lyrical  on more than one occasion about his collaboration  with Rick Ruben at the twilight of his career which gave us the magnificent six American Recordings albums.

Today we focus on the early years. The other day Mrs CC came in with the three disc box set Walking the Line: The Legendary Sun Recordings. However it was already on the shelves and it has therefore gone to the charity shop today.
Before it went it seemed churlish not to feature a great song from each of the three discs which were recorded between 1955 and 1958.
Where as the box says  the Man in Black created and perfected the timeless,pared-down and plain spoken sound that would make him a legend.

Johnny Cash - I Walk the Line