A Splendid Racket .... for Blur 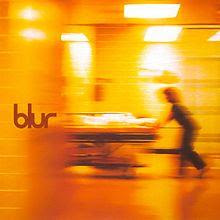 For a brief moment I thought about featuring Blur by Blur on Monday but it didn't quite tick all the boxes. Nevertheless it is indeed a splendid racket .. for Blur.
From 1997 Blur was their fifth album and arguably their last great one. Although a bit more experimental than some of their previous efforts it still  enjoyed a fair degree of commercial success with the lead single Beetlebum reaching number one and Song 2 appropriately peaking at number two.

It got me thinking about bands releasing eponymous albums which are not their debut and whether this is egotistical nonsense. Maybe I'm reading too much into it and they just couldn't think of a better name.

The makings of a potential series here.Without giving it too much thought I was able to come up with a 2nd album, a 4th , a 9th  and a 14th  which also meet this criteria. I then thought that I should actually do some work. There are others out there