A Splendid Racket -One More Won't Kill Us 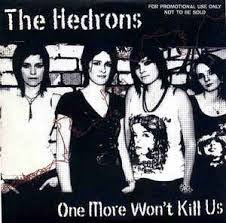 A day late - but well worth the wait.

I suspect that we all have albums and bands on the shelves and wonder why they never made it when compared to some of the dross that did.
One such album and one such band is One More Won't Kill Us the 2007 debut album, and indeed only album by The Hedrons on Measured Records.

A four piece all female rock/punk band from Glasgow they did indeed make a splendid racket.
I was eagerly awaiting the album being released so much so that I ended up with a promo copy.

I've featured this before to considerable indifference