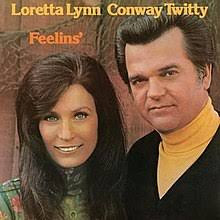 The new window is now in the Muso Room but has still to be varnished.
This means that the vinyl is still stacked up in the Living Romm.

Fortunately Feelins' a 1975 duet album by Loretta Lynn and Conway Twitty was at the front of one of the many piles thus allowing this weeks Vintage Country Vinyl to be posted.
Loretta and Conway both made appearances in the first iteration of this series but this is the first time that they have features as a duo.
I wasn't aware that they were an established double act but it turns out that they released ten albums together with this one being the fifth.There were a further seven best offs/compilations for good measures.

The album cover features the most hair since Rainbow appeared on these pages. (You will note I did not use the word graced)
More of the same next Sunday