A Splendid Racket - Live Through This 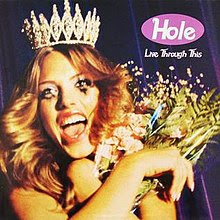 For whatever reason I'm struggling for motivation for this series. So if this to be the last offering there is a certain symmetry given that it started with Kurt and ended with Courtney.
From 1994 Live Through This on DCG in the States and City Slang in Europe was Hole's second album and easily their best known and most commercially successful in no small part due to the fact that it was released one week after Kurt Cobain's suicide.The release date did little to endear  his widow Courtney Love to many Nirvana fans.
Spin, an American music magazine wrote Live Through This is both a scruffier and more commercial record than Pretty on the Inside. The angsty rants of yore remain, but they're decorated with a lot more poetry
For the purposes of this series I've gone for two of the more angsty rants.