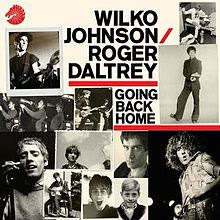 Mrs CC is currently having a bit of a clear out. This involves countless trips to the tip and to charity shops.
She made a school girl error the other day when she was content to sit in the car while I struggled into the charity shop weighed down by a large mirror and two large bags of clothes.
I was there longer than she anticipated as my instincts kicked in and I felt obliged to check out the CDs.
I came away a pound lighter but two CDs heavier.

One was Going Back Home by Wilko Johnson and Roger Daltry on the mighty Chess label. It has featured here before . Previously my brother had lent me it and  I thought that I had it on the shelves. It turns out that I downloaded it but never got round to producing a physical copy. That has now been sorted.

Wilko Johnson & Roger Daltry - All Through the City
Posted by Charity Chic at 08:00