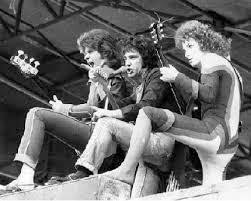 When it comes to a Splendid Racket the Sensational Alex Harvey Band are up there with the best of them.
However unlike some others who are full on from the get go the band liked to build things up gradually ending  with a crescendo as was only fitting when there was a showman like Alex leading the line.
Alex Harvey started off playing jazz and skiffle  before moving on to blues and rock'n'roll winning a competition as Scotland's answer to Tommy Steele in the process prior to becoming a cast member in the musical Hair.He was constantly reinventing himself a la David Bowie
Somwhow I can't imagine Tommy  belting out Next or appearing on stage with a clown faced Zal Clemenson

Sadly Alex died  of a heart attack in 1982 the day before his 47th birthday en route to a  gig in Zeebrugge. He remains a Glasgow legend
Drummer Ted McKenna died in January aged 68. As far as I am aware the rest of the classic line up - Zal Clmenson (guitar), Chris Glen (bass) and Hugh McKenna (keyboards) are still with us

Talking of Splendid Rackets I went to see Domiciles supported by Slime City on Friday at the Old Hairdressers at a Last Night from Glasgow Gig
Domiciles have  hints of throbbing krautrock & dreamy shoegaze (LNFG) about them whereas Slime City were the loudest band I've seen in many a year. They were quite bouncy with shades of Devo and Bis (Manda Rin was there cheering them on)
Posted by Charity Chic at 08:00