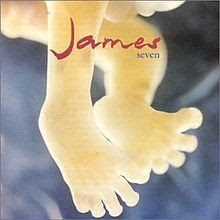 When putting Jason & the Scorchers back on the shelves I noticed that there were some James albums in close proximity(Vinyl is alphabetical, CDs are  alphabetical by genre)
Whilst I've never been a huge fan of the band I seem to have acquired their first five albums from Whalley Range's finest over the years.
Somewhat strangely only album five Laid has graced these pages before.
So using some reverse chronology today I am featuring their fourth album 1992's Seven on the Fontana label..Those looking at the image above will have probably worked  that out..

It maybe sounds a wee bit dated but it was good to give it a spin again. For your listening pleasure here are the 2nd and 4th singles from the album.


Third, second and first albums to follow in due course.