Good Boys ... When They're Asleep 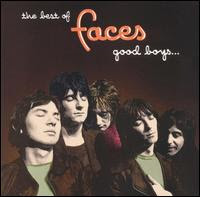 I took the opportunity whilst on holiday to upgrade my burn of The Best of Faces CD Good Boys ... When The're Asleep.
Always good to get a new CD and have no storage issues.
Compiled primarily by Ian McLagan and released on the Rhino label in 1999.
As you would expect it is terrific stuff.19 tracks of bluesy, ballsy, gutsy rock'n'roll by Kenny Jones, Ronnie Lane, Ian McLagan, Rod Stewart and Ronnie Wood.

I've gone for two that haven't featured here before namely Miss Judy's Farm a single from June 1972 and Stay With Me from December 1971 which was their first single to chart remaining in the charts for 14 weeks and peaking at number 6.
Both appear on the brilliant album A Nod is as Good as a Wink .. to a Blind Horse (first and last tracks on side 1). I have it on vinyl but sadly it is not in a very good condition. It did however only cost me 65p.