A New Kind of Loneliness 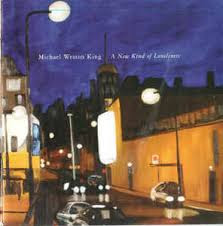 Michael Weston King is an English Americana/country singer who has enjoyed a solo  career as well as having been the main man in The Good Sons and who is now one half of the country duo My Darling Clementine with his wife Lou Dalgleish.
His 7th solo album A New Kind of Loneliness from 2007 and on the Floating World label.was my second recent charity shop purchases.
I'm pretty sure that I have seen him a couple of times in the early 2000's when he was somewhat more hairy.
I have a couple of his songs on compilations but this is the first of his that I have ever owned.
I'm not sure whether to file it under W or K. Given there is no hyphen I'm thinking K

The album contains what I think may be a first for CCM - a Gilbert O'Sullivan cover!
Confession time and here is where I loose the little credibility that I have left.As a young lad I was a huge Gilbert O'Sullivan fan and even kept a scrapbook full of cuttings!
I'll get my coat