A Hundred Miles Off 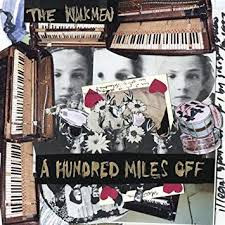 My plan to save space by returning charity shop compilations after culling the better songs isn't quite working.
It has been leading me to buy albums from some of the artists who grabbed my attention.
Last week it was the turn of The Beauty Shop
This time around it is another American indie band The Walkmen.

I was quite taken by Lost in Boston  on a Now Hear This! compilation from October 2006.
On the back of this I  then picked up a copy of A Hundred Miles Off the album from whence it came.


On the first listen I wasn't too sure about it. After a second listen I'm pretty much hooked. The splendidly named singer Hamilton Leithauser has an interesting vocal style; shouty on some occasions, Dylanesque on others.
Seven albums released between 2002 and 2012 with the band  currently on hiatus pursuing solo careers.
And indeed a splendid racket on occasions. More exploration clearly required.


The Walkmen -Good For You's Good For Me

The Walkmen -Don't Get Me Down (Come On Over Here)
Posted by Charity Chic at 08:00