Songs in the Key of Fife 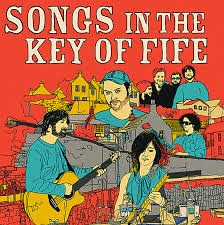 If you are looking for a Christmas present for a music lover or looking for something to spend your Christmas money on you could do a lot worse than purchasing Songs in the Key of Fife an excellent book by BBC presenter Vic Galloway.
It is the intertwining stories of The Beta Band, King Creosote, KT Tunstall, James Yorkston and The Fence Collective.
All artists and bands who hail from the East Neuk of Fife as indeed does Vic.
My take on all those featured.
KT Tunstall - shot to worldwide fame with 2004's The Eye of the Telescope.Since then she has had a further four albums none of which have had the same success. Probably the most mainstream of the artists featured.
King Creosote - Kenny Anderson, heid honcho of the Fence Collective has recently finally received some well deserved recognition (in his mid 40s) following the success of Diamond Mine (with Jon Hopkins) and From Scotland with Love two terrific albums. He has a back catologue of about 50 records so plenty of exploring to do.
James Yorkston -  an artist who produces some fine acoustic folk. The only album of his I am familiar with is 2008's When the Haar Rolls In on Domino
The Beta Band - to my shame I have never really heard much of The Beta Band.. I recently downloaded a couple of their tracks and a couple of solo tracks from Steve Mason all of which are excellent. Some further exploring to do
The Fence Collective - a record label and collective based in Anstruther and Cellardyke founded by Kenny Anderson. Lots of artists with interesting pseudonyms which  again require to be explored further. In particular Kenny's brothers Gordon (Lone Pigeon) and Een (Pip Dylan) and his right hand man Johnny Lynch (The Pictish Trail)
Any more and you won't require to buy the book!

James Yorkston & the Athletes - Moving Up Country, Roaring the Gospel

The Beta Band - To You Alone
Posted by Charity Chic at 08:00