A Couple of Jems 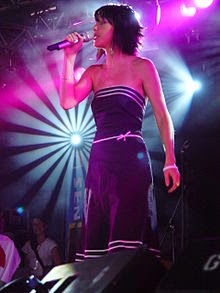 I picked up a copy of Finally Woken the 2004 album by Jem in Dingwall for a pound.
However it was scratched to buggery and kept jumping or sticking whilst playing.
So when I spied another copy in a charity shop in Nairn a few days later and for only 50p it seemed too good an opportunity to pass up.
Jemma Griffiths is Welsh (born in Penarth) so look out for her appearing in The Robster's excellent Welsh Wednesday feature.
Her music is kind of trippy electronica in a Goldfrappy ethereal sort of a way and is very pleasant.
Finally Woken enjoyed a modicum of success reaching number 6 in the album charts with the single They reaching the same number in the singles charts.
The 2008 follow up album Down to Earth did indeed come down to earth with a bump peaking at number 64 and she has released nothing since although a third album is intermittently threatened.