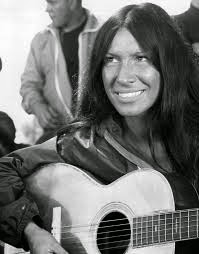 No, not the vampire slayer but rather Buffy Sainte-Marie - the Canadian American Cree singer-songwriter, musician, composer,visual artist,educator,pacifist and social activist
From 1968 two tracks from her album on Vanguard I'm Gonna Be a Country Girl Again where she accompanies herself on guitar and mouth bow and is assisted by a stellar group of Nashville musicians with the album being dedicated to Chet Atkins.
The Piney Wood Hills is a re-recorded Nashvillised  version of a song from her second album Many a Mile from 1965
Now That the Buffalo's Gone originally appeared on her 1964 album It's My Way and refers to the near extinction of the American bison and serves as a metaphor for the cultural genocide inflicted by Europeans.
She is famed for her protest songs which often focus on the issues of the indigenous peoples of the Americas and it is good to see one of these songs coming out of Nashville which is often associated as a redneck heartland.