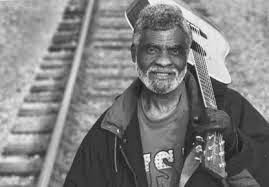 Ted Hawkins' music is described in various places as Soul Blues which is a pretty accurate description and one which entitles him to a Sunday slot.
He certainly had the checkered life of the itinerant Bluesman - reform school, prison, heroin addiction and busking along the shores and piers of Venice Beach.
He was probably most comfortable as a street performer
He had recorded a couple of albums on Rounder in the 80's, returned to busking and was then re-discovered by Andy Kershaw leading to the great album The Next Hundred Years on Geffen in 1994
He gained a popularity in Europe which he had not previously enjoyed in the States but sadly died on the 1st of January 1995 aged 58 following a stroke.
Sam Cooke and Otis Redding were huge influences on his singing style as demonstrated on his take on the country standard There Stands the Glass and a spell-binding version of John Fogerty's Long as I Can See The Light.

Ted Hawkins -There Stands The Glass

Ted Hawkins - Long As I Can See The Light
Posted by Charity Chic at 08:00