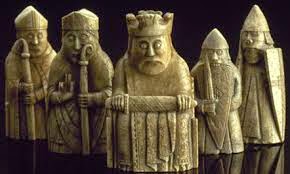 You were very nearly getting Oletta Adams today.
I was standing at the counter of a sale of work in the Caledonian Hotel, Ullapool with a meagre amount of change in one hand and an Oletta Adams CD in the other when I was persuaded by the  silver tongued gent behind the counter that I would be far better off purchasing Edge of Reason a 2000 album by Face the West

Face the West is/are seven young men from the Isle of Lewis who in 2000 had an average age of 18 and who play traditional Scottish music.

The Isle of Lewis is famous for the Lewis Chessmen and for being the last place in Britain where the Sabbath is  rigorously observed by the vast majority of the population.
Everything is closed on a Sunday and they even used to go as far as chaining up the swings as Heaven forfend it wouldn't do to have the weans enjoying themselves.

The bunch of weans on this record however appear to be particularly enjoying themselves.

Face The West - No Sheep Here

Face The West - Eilean Beag Donn a Chuain
Posted by Charity Chic at 08:00