The Gospel According to the Soledad Brothers 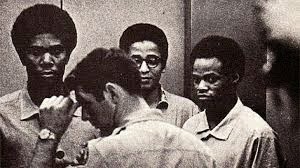 The  eponymous 2000 album on Estrus Records  by the Soledad Brothers purchased in a Nairn charity shop for the grand total of 50p - The bargain of the holiday.
On this album the Brothers are Johnny Walker on guitar,harmonica, organ and vocals and Ben Swank on drums and percussion.
Meg White also appears on percussion with production by  the legend that is Jack White.
From Maumee,Ohio they are named after the trio of convicted Black Panther members incarcerated in Soledad Prison.
The story of the original Soledad Brothers is pretty interesting and you can follow this link to read it at your leisure.
Re yesterday's post - this is how to produce some Gospel Blues Rory!

Soledad Brothers - Gospel According to John