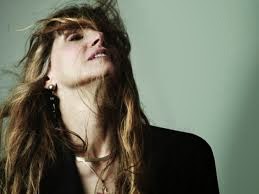 Angel of  Mercy a 1994 album on Rounder by Rory Block is another recent Ullapool purchase.
For some reason I had it in my head that she was from New Zealand and that she was a Cooking Vinyl artist.
However my subsequent extensive research tells me that she was born Aurora Rock on 6th November 1949 in Princeton, New Jersey (as opposed to New Zealand!)
She has had an impressive career releasing over 30 Country Blues albums from 1964 onwards.She has won five WC Handy awards - two for tradition Blues female artist and three for Acoustic Blues album of the year.
Despite such an impressive CV I have to admit that I was pretty underwhelmed following the first listen to the album although maybe it is a grower.
It starts out promisingly and there are a couple of good tracks which put me in mind of Michelle Shocked.
However the album peters out ending in a 9 minute song A Father and Two Sons commissioned by the American Bible Society based on the tale of the Prodigal Son which in my humble opinion is utter twaddle.

I may well be wrong given that the album was awarded the NAIRD Adult Contemporary Album of the Year for 1994 but I remain to be convinced.