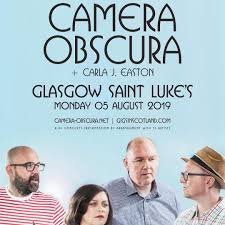 Great excitement at CCM HQ as we are off to see Camera Obscura tonight at St Luke's. As a very pleasant added bonus the support act is Carla J. Easton.
I've never seen them before and I'm expecting a great night.I also suspect that it will be rather hot.
One of two nights in preparation for their participation in Belle & Sebastian's forthcoming  Boaty Weekender cruise.
I could be wrong but I think it may be their first concert since Carey Lander's passing.

While having been familiar with many of their songs it was only as part of last year's birthday haul that I added My Maudlin Career and Let's Get Out of This Country to my copy of Desire Lines.
Here's one from each.

Full match report in due course.

Splendid though they may be Camera Obscura can never be excused of making a splendid racket. That has been postponed until tomorrow.
Posted by Charity Chic at 08:00