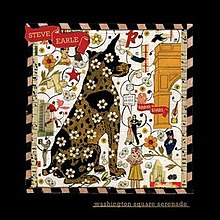 I'm a big fan of Steve Earle. I used to be a huge fan.
I have probably seen him more times than any other artist unless you count the likes of the Felsons or the Radio Sweethearts who used to support pretty much every Americana act who pitched up in Glasgow.

I've all his albums from  his 1986 debut Guitar Town up to 2002's Jerusalem picking  up many of the later ones on the day of release.
I have copies of the other three albums he released in the 2000's but none of those released since.
One of those copied is his 12th studio album 2007's Washington Square Serenade. I gave it a listen the other day and I had clearly forgotten how good an album it was.
It won a Grammy in 2008 for Best Contemporary Folk/American Album, There is pretty much a Grammy for every genre or sub genre.

Steve Earle - City of Immigrants
Posted by Charity Chic at 08:00