State of the Union - Indiana 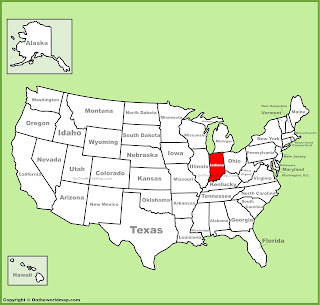 A new series where George does all the heavy lifting and I throw in the  occasional song if the mood takes me. Over to George


I have been reading a novel called Turtles All The Way Down. It is set in Indianapolis. And all the time I have been reading, well some of the time, occasionally, now and then, I have been thinking of the lyric “can’t go west, can’t go east, I’m stuck in Indianapolis dum dum dum dum  dum duuuh”.  Well, only part of that is the lyric, the rest I just made up. And I also wondered if Charity Chic wanted an idea for a new series, namely a song with a state of the USA in the title, and he’s taken me up on the offer. It was only later that I realised that Indianapolis is a city not a state, the clue being in the “polis” bit.  And before doing some more research I am assuming Indianapolis is in the state of Indiana. It is, and the city is sometimes referred as Indy, I am led to believe, and after further research it is indeed the home of Indycar racing, which I now know does not mean Independent Car Racing. And  home of the Indy 500 race, that one where cars go round a curved cornered rectangular track. And the Indy 500 does not mean 500 laps but 500 miles – there are 200 laps, no prizes for calculating the length of one lap. Sounds more tedious than basketball, the game where a goal is scored every two seconds.
So the series will feature a state of the USA each week (is it each week, CC?) (hopefully! -CC) and the title must contain either a city or town  in the state, or the name of the state. Well, it will for the first few (if I am allowed to get so far as “few”).  Maybe I can get a bit further than the risible two offered by Sufjan Stevens in his aborted series.

The song today is by The Bottle Rockets, who are as far as I am concerned an Americana band, although more southern rock than country. They have featured on these pages before, with the splendid track $1000 Dollar Car, and today it’s Indianapolis.  Whereas $1000 dollar car has a beat-up, indolent musical quality, well matched to the sentiments of the song, Indianapolis is more up-tempo, not by any means cheery given that the singer is Stuck In Indianapolis, but not frantically get-me-out-of-here quick either.  Here it is:

How GOOD was that?
·         I could have featured a song by The Jackson 5, who are from Indiana, called Going Back to Indiana, which would have met my original criterion, but it’s rubbish. So I did not.
·         If this series was to feature musicians from each state I could have featured Axl Rose, born in Lafayette, Indiana. But it is not, and I would rather eat Shaggy’s toe clippings than listen to Guns N’ Roses. Shaggy our dog, not Shaggy from Scooby Doo or Shaggy the reggae chap. Which is not to imply that I would eat the toe clippings of either of those gentlemen.
·         The bloke who wrote Jingle Bell Rock came from Helmsburg, Indiana. The Fall’s version is better, of course.
And finally from me, there is a rather obvious song that meets my original criterion, one that got to number 2 in the Canadian charts, a song about being chased and finally, possibly, killed after a shoot-out with the police. And here it is!

CC writes - thanks George. You have come up with the obvious one. I've managed to come up with another.
Over to you folks