Foxes of the Fleet Variety 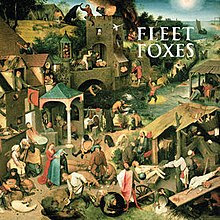 Over the holiday period I played the 2008 debut album by Seattle Indie Folk band Fleet Foxes for quite possibly the first time in about 5 years.
It was an album that was released at the time to an incredible amount of hype it debuted at #11 in the UK album charts and peaked at #3
It was critically acclaimed with Q Magazine voting it the 2nd best album of 2008 and Uncut going as far as describing it as the most rewarding of the last 12 months.
They were certainly an act that everyone was talking about at the time.

My take for what it's worth is that I like it well enough but I feel that the fact that I haven't listened to it for years probably tells it's own story. I never felt the urge to pick up their follow up albums Helplessness Blues from 2011 and Crack- Up from 2017 although I do have a burn of the former. I would probably pick them up were I to spot them in a charity shop.