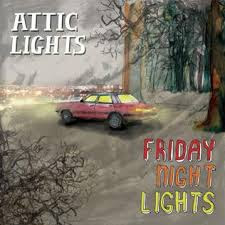 When I was rummaging through the A's for my new Saturday serious I happened across something that I thought would do just the job for Friday night - Scottish power pop.
The band in question are Attic Lights and the album Friday Night Lights is from 2008 on the Island label.

I thought I had featured it before but that was not the case. I did however post their self titled 2005 debut EP in my Tartan Texans series way back in 2014.

As far as I can gather at the time the band consisted of Kev Sherry (vocals/guitar), Colin McArdle (vocals/bass), Jamie Houston (vocals/guitar/keyboards), Tim Davidson (guitar/pedal steel) and Noel O'Donnell (drums).
The album was produced by Francis McDonald of Teenage Fanclub fame which might not come as a surprise when you hear the music.

They had another album Super De Luxe  in  2013 and seem to have Love in the Time of Shark Attacks scheduled for 2019 although I must admit that their name or music have not crossed my radar for a good few years.

Attic Lights - Never Get Sick of the Sea

Attic Lights - Nothing But Love
Posted by Charity Chic at 08:00