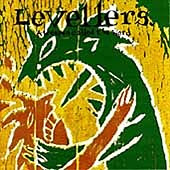 I only have the one album by New Age crusties The Levellers and that is their 1990 debut A Weapon Called the Word on the Musidisc label.
An album which impressively achieved platinum status despite never troubling the UK albums chart.
Not one I play all that often these days but one I played a fair bit at the time.

I suspect that I bought it after seeing them perform at the Fleadh at Glasgow Green back in 1992
A pretty decent line up  as I'm sure you will agree.
I can only remember seeing them,Martin Stephenson,Kirsty MacColl, Christie Moore, the brilliant Frankie Miller and the grumpy Van Morrison
It is either the sands of time or the Workers Beer Company products on the day that have blurred my memory somewhat.

The Levellers - Carry On