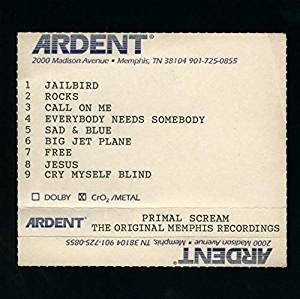 My last purchase of 2018 was Primal Scream: Give Out But Don't Give Up - The Original Memphis Recordings.
It had been on the list since  I watched the BBC 4 documentary a couple of months ago.
I picked it up in Fopp but hummed and hawed about the price. I came to my senses a couple of days later and got it in  Love Music for 3 quid cheaper!

I don't have the subsequent Give Out, etc  1994 album (my Primal Scream collection consisted of Screamadelica, XTRMNTR and Riot City Blues  before this one) but am familiar with most of the songs.
It starts out reasonably rocky on Jailbird and Rocks but then descends into some wonderful soulful country rock and gospel.
Although it was original recorded and produced in 1993 by the great Tom Dowd  it did not see the light of day until very recently after Andrew Innes found the  tapes in a box in his house
I did not hear  this before  I had  listened to my top album of 2018 - The Last of the Gracious Losers. There are some similarities particularly with the brilliant gospel harmonies.

Here is a fine example