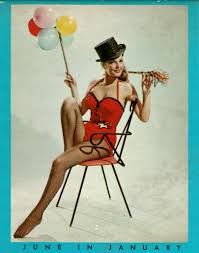 Wishful thinking on Julie's part
Two months for the price of one this time round
For the second month running Julie finds herself relegated from the 1st to the 2nd but given yesterday's post I'm sure she would have understood.

June in January is a song with music by Ralph Rainger and lyrics by Leo Robin which was first published  in 1934. It first appeared in the film Hear in My Heart where it was performed by Bing Crosby.
Many others have covered it including Dean Martin, Guy Lombardo and Jo Stafford

We are now a quarter of the way through Calendar Girl - only another nine to go George!

Julie London - June in January
Posted by Charity Chic at 08:00