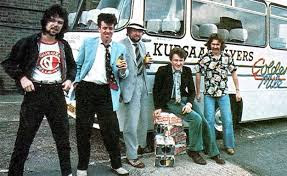 Two songs by two bands who I've never owned anything by but have always had a bit of a soft spot for. In both cases I'm featuring pretty much the only "hit" they ever had , and I use hit in the loosest term of the word.

The Kursaal Flyers were a band from Southend-on - Sea and were contemporaries of the likes of Dr Feelgood and Eddie and the Hot Rods. Their drummer Will Burch  who later joined the Feelgoods wrote the excellent book No Sleep Til Canvey Island about the Essex scene which you should track down and read. Sadly I lent my copy to someone and never got it back.
Their hit was Little Does She Know from 1976 which was in the charts for 10 weeks peaking at number 14. 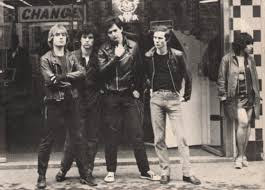 The Leyton Buzzards were even less successful. From Leyton in East London they were active between 1976  and 1980 and their  big single was Saturday Night (Beneath the Plastic Palm Trees) which spent 5 weeks in the charts peaking at 53  in 1979 earning them an appearance on Top of the Pops.
Two of their members  went on to feature with Modern Romance but the less said about them the better.


Kursaal Flyers - Little Does She Know