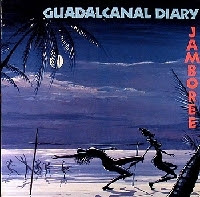 This one is down to Brian
Guadalcanal Diary are a band I first heard of  courtesy of his blog when he featured their song Watusi Rodeo. A couple of their songs subsequently featured on the now legendary Hoboken to Athens compilation CDs by kevinpat.

Brian is on record in saying that he considers Jamboree their second (of four) album from 1986 on Electra as their poorest.
I was not however going to turn down an opportunity to pick it up at a reasonable price among the usual dross in the vinyl section of Oxfam in Clarkston.
A band from Atlanta in Georgia you can see some obvious comparisons with  their near neighbours from Athens R.E.M. Given that this was from when R.E.M were very good this is no bad thing.
Allmusic gives Jamboree 3.5/5 which is probably just about right.