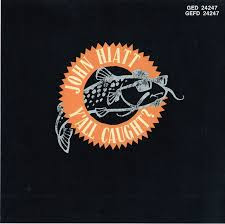 John Hiatt is a name that has crossed my radar many times but I am not really  that familiar with his music.
All I know is that he appears on the brilliant Flaco Jimenez album Partners with Across the Borderline a song he wrote with Ry Cooder. I recently discovered that he was part of  the "super group" Little Village who someone gave me a CD from. He also appeared here in July with a good song called Crossing Muddy Waters from a 2000 Uncut compilation.

Sounds then  like someone I need to know about and hear more of. Picking up Y'all Caught? The One's That Got Away 1979-1985 in a charity shop in Stranraer seemed a good place to start. Apparently a Best of from 5 albums he released on MCA and Geffen during this period..

I have to admit that I was majorly disappointed when I got round to playing it as it  is very much AOR.
One part country, one part Blues, two parts Huey Lewis & the News.

I may have caught it but I am going to throw it back again.

John Hiatt - She Said The Same Things To Me

John Hiatt - It Hasn't Happened Yet
Posted by Charity Chic at 08:00