What Passing Bells For These Who Die As Cattle? 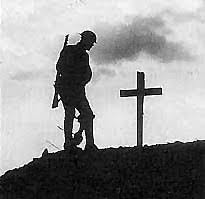 Today marks the centenary of the Armistice between the Allies and the Germans at Le Francport near Compiègne in France at the eleventh hour of the eleventh day of the eleventh month.
The war that was meant to end all wars saw the death of between 15 to 19 million people - 9 to 11 million of them military personnel.

I've featured the words of Wilfred Owen and the music of Eric Bogle before on this date and I make no apology for featuring them again.They sum up the futility and the carnage better than I ever could.

And in the morning we will remember them.

The Pogues - The Band Played Waltzing Matilda
Posted by Charity Chic at 08:00