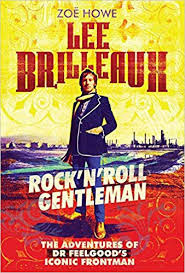 If you ever visit Granton-on -Spey in the Cairngorms you should make a point of popping into the bookshop. It is run by a lovely lady who is 68 and who knocked a couple of quid of the price of our purchases as she thought that the books were dusty!

I came away with Lee Brilleaux -Rock'n'Roll Gentleman a crowd funded book by Zoe Howe.
It is an excellent read about the sadly all too short life of the  legendary Dr Feelgood frontman  and bon viveur who came into the world as Lee Collinson.
Sadly he died in 1994 at the age of 41 at home in Leigh on Sea.. He died from lymphoma. Smoking and eating large amount of red meat can contribute to this two things he did in abundance.Twenty years of hard drinking probably didn't help much either.

He did however leave an impressive legacy of r&b/ pub rock music none of which I currently had until I picked up Dr Feelgood Live at the BBC in Glasgow's Love Music record shop recently.
It features songs from  three sessions between March 74 to September 75 when Wilko Johnston was still the lead guitarist with the band
These two tracks were recorded at the Paris Theatre, London on 14th September 1975

I recommend both the book and the record.