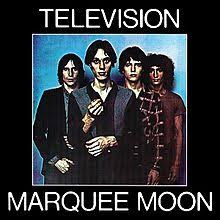 A band who had been prominent on the New York scene and no strangers to CBGBs where they shared the stage with the likes of Blondie, Patti Smith and the Ramones.

Given the Punk revolution which swept the UK in 1977 this song should have stuck out like a sore thumb. I mean only Prog Rock bands were churning out 10 minute epics in those days.

And yet, and yet, it seemed to fit in just swimmingly and subsequently influenced many others.