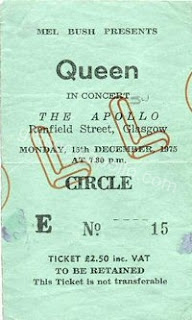 The first band I ever saw in concert were Queen at the Glasgow Apollo in December 1975. Technically I suppose you could say that the support act Mr Big were the first band that I saw but they don't fit in to this series and I have no material by them.
The only Queen album I have and the only one you need is Sheer Heart Attack

I never  got to see  Prince but Mrs CC did at Hampden Park in Glasgow in June 1992
So today we have Queen singing about  a Queen and Prince singing about Prince.

Featuring two  legendary  showmen who sadly are no longer with us

Prince - My Name is Prince
Posted by Charity Chic at 08:00