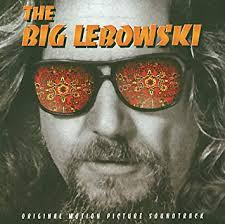 Confession time and it's one which is likely to make me loose the small degree of credibility that I currently have left.
I've never seen The Big Lebowski! Sorry Dude.
I'm not quite sure how this has happened given that I enjoy the films of the Coen Brothers.

Now that's out the way it's onto the music.Mrs CC selected the Original Soundtrack in a charity shop in Blairgowrie and I thoroughly  approve of her choice.
It is somewhat eccentric, eclectic and left field, descriptions which, I imagine, may also apply to the film.

Produced by the Coens and T-Bone Burnett. it contains classical music,opera, Captain Beefheart and Kenny Rogers murdering a soul classic. It  does as one review suggests contain some skipables.
I'm going for another couple of covers. The Gypsy Kings first with a somewhat unique Latin slant on Hotel California.
Walter featured Townes Van Zandt's cover of the Stones' Dead Flowers about a month or so ago.I'm featuring it again here as for me it is the standout track on the album.