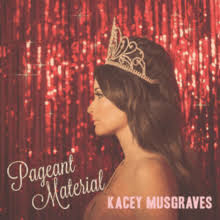 I was quite impressed to see the brilliant Same Trailer Different Park by Kacey Musgraves in a charity shop in Dunblane. One that is currently on the shelves.
A few minutes later I came across the 2015 follow up Pageant Material.
It contains songs with the same clever lyrics covering the minutia of life in small town Mid-America far from the more cosmopolitan large coastal cities. The kind of places where people actually vote for Trump.

The lyrics are excellent but for me the songs are a bit more sugary and mainstream than those on it's predecessor. Still well worth a pound though
She is now married to fellow country singer Ruston Kelly although she should probably retain her maiden name rather than go by the moniker Kacey Kelly!