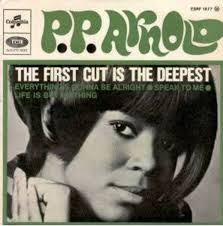 I picked up Sisters of Soul a cheap and cheerful compilation in a Nairn charity shop
Twenty  mostly well known tracks by various female Soul artists.
Many of these artists grace the shelves and many of the artists and a few of the songs have featured here before.

However there are a few I didn't have which made a pound a fair investment.
The First Cut is the Deepest is of course most well known courtesy of the Rod Stewart version from 1977 but P.P. Arnold was the first to release it in 1967.
Until now I was unaware that it was written by Yusef Islam the artist previously known as Cat Stevens.

Sisters Beverley, Shirley and Valorie are better known collectively as The Jones Girls.Exponents of Philly Soul they enjoyed a degree of success and popularity in the late 70s/early 80's including Nights Over Egypt a single from 1981

P.P. Arnold - The First Cut is the Deepest

The Jones Girls -Nights Over Egypt
Posted by Charity Chic at 08:00