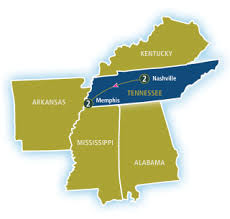 As things stand it is now Memphis 2 Nashville 1 following Chuck Berry's Memphis, Tennessee defeating Steve Earle's South Nashville Blues. Steve  started strongly but Chuck's greater experience gradually came to the for.
This week we are going slightly more MOR for what I expect may be another close contest.
If you were to ask 100 people to name a Marc Cohn song chances are if they had heard of him at all they would all plump for Walking in Memphis. Very much a one-hit wonder. I picked up his eponymous album in a charity shop and all the other tunes are pretty forgettable.

The Indigo Girls on the other hand have never had a hit of that scale but have produced a consistent body of work over the years including Nashville a song from their 1992 Rites of Passage album.

I'm going for Nashville this week as although Walking in Memphis is a good song  it is a bit too ubiquitous for my taste.
Others, of course, may choose to disagree

The Indigo Girls - Nashville
Posted by Charity Chic at 08:00