Crowns and Coronets # 6 - Another Guest Contribution 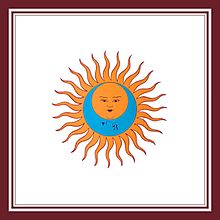 A guest contribution a couple of weeks ago from Germany and now one from Portugal. Chances are we will not be allowed such continental collaboration after Brexit which would be disappointing.
Then again  maybe no jazz fusion or prog rock. Mmmmm!
Take it away George...


Two wildly different tracks today in CCs king and queen series, one prog rock and one from South Africa.
By now I have lost at least 80% of readers by using the words  “prog rock”. Look, it could be worse,
I could have written “one of today’s tracks is smooth jazz” . The first group features Mr Toyah Wilcox
(oops, there goes another 7% of readers)  and to shed the remaining 13% I should add that the album
this track is taken from has been reviewed with those dreaded words “jazz fusion” (see how I didn’t make
a maths teachers joke by saying “the remaining 15 %”?).  The album is Larks’ Tongues In Aspic, and the
track is the last track on the album, and is called Larks’ Tongues In Aspic, part two.


So that’s 7 and a half minutes of your life listening to King Crimson  that was very well spent. Given that
there’s now no one reading these words it looks like I’m talking to myself. “Tremendous track, that one,
George.”  “You’re not wrong there, George.”
The Mahotella Queens’ track is from the album Izibani Zomgqashiyo. According to the notes on the back
of the album this means “the lights of Mgqashiyo, and surely everyone knows that Mgqashiyo is an" African
kind of beat which will never die”. I should have started this article with the Mahotella Queens,   because
no-one has made it this far down (as the actress said the bishop).

Thanks to my very good friend CC for hosting this, it led to me playing two albums that have not had an
airing for a long time.