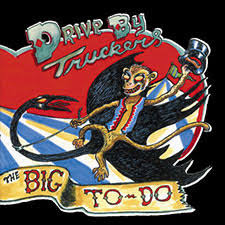 I looked out The Big To-Do by Drive-By Truckers last week as I was contemplating featuring The Birthday Boy.I then gave it the first listen for a while.
From 2010 it was their 8th studio album and the last of theirs I bought. Also it is only the post Jason Isbell one that I have. There is probably a correlation between these two sentences.
I preferred when they were a triumvirate with Jason, Patterson Hood and Mike Cooley sharing the song writing and singing.
On The Big To-Do 8 of the 12 are written and sung by Patterson Hood with Mike Cooley and Shonna Tucker weighing in with two each.
Patterson states that it is very much a rock album and he is right.. Nothing wrong with that but they and me were beginning to go in different directions.
Having said that it is not really a bad album and I have gone for two of Mr Hood's numbers today. Two great stories as is his want

I've probably mentioned this before  Patterson is the son of the great bass player David Hood of the Muscle Shoals Rhythm Section/Swampers fame.

Drive-By Truckers - The Wig He Made Her Wear