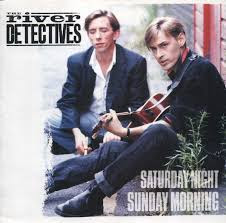 Back from our travels with some assorted nonsense which I will subject to to over the next couple of weeks.

First up from 1989 are Craigneuk's finest Sam Corey and Dan O'Neill  collectively known as The River Detectives and their debut album Saturday Night, Sunday Morning.
They went on to record another two although this was the only one which charted reaching the dizzying heights of #51
There is an excellent cover of Factory on it which would have featured and probably won the Springsteen Covered challenge had I had it at the time.