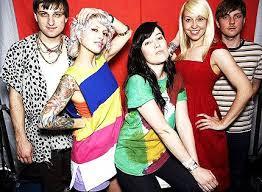 I approached the counter of Cancer Research in Stranraer with a River Detectives CD in one hand and £1.50 in the other.
"There is a sale on" said the lady "four CDs for a pound"
"That's ok " I responded "I don't see any others I like"
"There are plenty more in the back shop if you want a look"
Sure enough there were about 200 or so stacked up on the floor and pretty exclusively rubbish.
Compilations, dodgy 80's stuff and plenty of country but bad country.
I couldn't see anything I fancied but felt obliged to come away with something seeing as how I had been granted access to the back shop.
I went for Patty Lawless (bad country - since recycled) and two Uncut Playlists from July and November 2016.
Somewhat perversely November first as it was the first one that got an airing
An excellent number from the excellent Pernice Brothers from their album from that year Live a Little.
Followed by Tilly and the Wall a band I had heard of but was not familiar with until Strangeways posted an excellent ICA at JC's place) with a track from their album Bottom of the Barrel

The Pernice Brothers - High as a Kite

Tilly and the Wall -Rainbows in the Dark
Posted by Charity Chic at 08:00