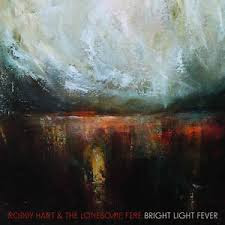 Another EP - Bright Light Fever was a 2013 single for Glasgow band Roddy Hart & the Lonesome Fire.It was released on Odd Art Records but subsequently appeared on their eponymous debut album from that same year which was on Middle of Nowhere Records which ended up on the longlist for the SAY Award 2014.

Roddy Hart is well known as a BBC Radio Scotland presenter and as compere for the Roaming Roots Review at Celtic Connections. He has also formed a firm friendship over the years wit the legend that is Kris Kristofferson. He appeared at Glastonbury this year with KK when they were joined on stage by some boy called Johnny Depp.
Tracks 1 and 2 today with the others scheduled to feature soon