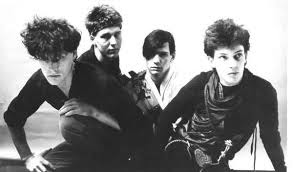 I watched the documentary The Sound of Young Scotland a couple of months ago.
It told the story of FAST records from Edinburgh and Postcard records from Glasgow.
Like most I was more familiar with Postcard than with FAST.
The Edinburgh bands most prominently mentioned included The Fire Engines , Josef K and Scars.
I was familiar with the first two but had no recollection with the latter.
Like many a good bands they didn't last long - from 1979 to 1982 to be precise with one album from 1981 Author!Author!
The disc I came away with is a four track radio session. I've no idea where and when it was recorded but I suspect it may be from their brief comeback in 2010/11 given that They Came and Took Her is titled They Came and Took Her (Again)

Scars - You Turn Me On

Scars - They Came and Took Her (Again)