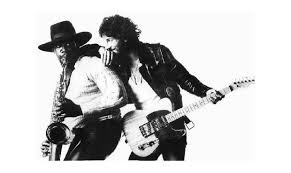 A narrow win for Bruce last week although the Pointer Sisters would have had him!
So we now have the score reading  The Boss 9 The Rest 8
Squeaky bottom time.

Time than to feature Born to Run.
It was always going to feature but we nearly had a Purple Ronnie the arch narcissist situation when he held out for the Hollywood penalty only to be let down by his Portuguese colleagues, Glorious!

Originally I was going to feature Suzi Quatro but her version is absolutely dreadful. My brother was playing this in a van once when his pal ejected it and threw it out the window. Now I  am not one for condoning littering the M6 but in this case I am prepared to make an exception.Not one for the Swede's eagery awaited Suzi Quatro ICA.
So instead I give you Frankie Goes to Hollywood.

Much better but you cannot improve on perfection so it is Springsteen again for me this week.

Others perhaps may choose to disagree.

Suzi Quatro -Born to Run
Posted by Charity Chic at 08:00