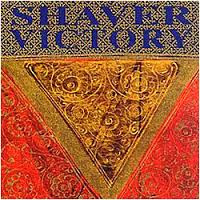 Country star Billy Joe Shaver made his name as a member of the Outlaw movement and as a hell raiser including an acquittal for shooting a man in 2007, He also lost two fingers after his hand got caught in machinery leading him to altering his guitar style somewhat.
Towards the end of the 90's following a number of family tragedies  he rediscovered religion with a series of albums as Shaver with son  Eddy on guitars and dobro.
Sadly the tragedy continued with Eddy dying following a heroin overdose in December 2000.

1998's Victory from New West is named after his mother whose name was indeed Victory.It's a belter
Stark and desolate yet illuminating - Marc Greilsamer

By the time I got round to seeing him at The Arches his demons and the drugs and/or alcohol had sadly returned.

Shaver - If I Give My Soul

Shaver - My Mother's Name is Victory
Posted by Charity Chic at 08:00