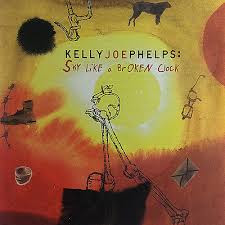 Some mellow jazzy blues for you today from Kelly Joe Phelps who would have featured in my Three Names series had I not got bored with it.
Sky Like a Broken Clock ( a set of low-key abstract story-songs about voodoo,sin and prostitution - Allmusic)  his fourth album from 2001 and on Rykodisc is the only one of  his I have and coincides from a time that I was listening a lot to the Paul Jones Rhythm and Blues show on Radio 2.

I subsequently saw him at King Tuts which was probably the wrong venue for his mellow approach..